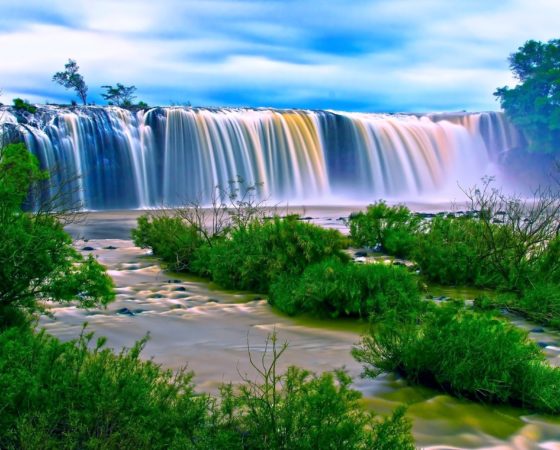 Sly as a Crocodile – Part 1

On the banks of the Zambezi river, where the red earth leads to rushing water, that slithers past in winter, and roars past in summer, Edward Morgan-White lived. Edward, or rather, Eddie, as he had always been called by everyone, lived in the small hamlet of Victoria Falls and had inherited his parents’ home after their passing.

Edward’s parents were English missionaries; kindly, devoted folk who had left their wet and cold homeland, in the early 1900s, to come to Africa and bring ‘God’s word’ to the indigenous people. They had brought with them, the Lord’s Bible, Mrs Morgan-White’s dowry – a chest of linen, one silver tea pot and six China teacups and saucers. Pastor Morgan-White had also brought along a much prized and loved pair of binoculars in amongst their meagre worldly belongings.

Being part of the first group of white settlers to come to Victoria Falls, the Morgan-Whites were one of the few who survived the devastating effect of malaria at the first village outpost that was set up, suitably named ‘The Old Drift Town’. The hardy Morgan-Whites were moved along with only a few other survivors and established a home further up the river, in current day Zimbabwe.

As the missionaries settled into Africa, and the years progressed, so did their flock. They were able to build a home on the banks of the Zambezi river, a simple homestead that doubled as a safe haven. All manner of persons found a tin plate of warm food, and a cup of strong English tea in the sparse cool lounge. The house was built with the financial support of their brethren from their home congregation, combined with assistance from two of the more well-off, God-fearing families of the Victoria Falls community (which was mostly comprised of less than savoury characters). Their homestead was set on a grassy mound, surrounded by African bush trees, and one large baobab, and looked down towards the Zambezi. On the thick, coarse grass, below the house, stood a small shelter that had been erected to allow for Pastor Morgan-White to administer his sermons for his congregation on Sundays. Unfortunately, and with religious zeal, a lone male elephant would regularly remove the shelter from its footing – pulling it up from the ground and then dropping it so as to be able to stomp on it – thereby ensuring that the people of the congregation would be required to work quickly, in order to ensure the structure would be replaced in time for the next service.

Despite the challenges, the couple found great joy in their work. Pastor Morgan-White was often busy lending an ear to those who sought his wisdom and guidance, and he regularly performed burial services, and the occasional wedding.

Mrs Morgan-White kept a clean house, and full larder, as well as a makeshift school. But despite her numerous prayers for a child, she was unable to conceive. It was only when the couple, now well into their 40s, had given up hope of having a child of their own, did Mrs Morgan-White begin to find herself completely and utterly exhausted, to the point of nausea. At first, she thought it would pass, perhaps something in the water; however, the nausea seemed to compound and become worse. She felt certain she had caught something from her surroundings. Perhaps something from the children she taught at school? They often wandered up to her and rubbed their snotty noses on her skirts. She decided to consult the African herbalist who stayed in a village not far from their home. A European doctor was many days ride away, in Bulawayo and the desperate Mrs Morgan-White had started feeling as though she didn’t have much time to live, so she consulted the herbalist in secrecy, who, after walking around her and sniffing her hair, announced that she was pregnant and shooed her out of his hut.

Feeling foolish for not knowing, as a mother should, that she was with child, Mrs Morgan-White only told her husband of their blessing that night. So overjoyed was he, that he ran out the house and down the slope of green grass to the river – his hands raised in the air, in absolute gratitude, for the gift his God had bestowed upon him. His elation prevented him from seeing the male hippo in his path, and before the kind pastor could turn and run, the animal snapped its impressive jaws around his waist, dragged him to the ground and stomped the life out of him.

This was first published in the Billboard Magazine in February 2020